Botryococcus braunii is a colony forming microalga with individual cells of the colony held together by an extracellular matrix composed of liquid hydrocarbons embedded within a cross-linked hydrocarbon polymer core and a sheath of polysaccharide fibers surrounds the entire colony. There are three races of B. braunii (termed A, B, and L) that are defined based on the type of hydrocarbon produced. The A race makes fatty acid-derived alkadienes and alkatrienes ranging in odd-carbon-numbered sizes from C23-33. The B race produces C30-37 triterpene isoprenoids known as botryococcenes. The L race produces the C40 tetraterpene isoprenoid hydrocarbon known as lycopadiene. The Devarenne Lab studies all three races in an attempt to decipher the biochemical pathways for biosynthesis of these hydrocarbons. 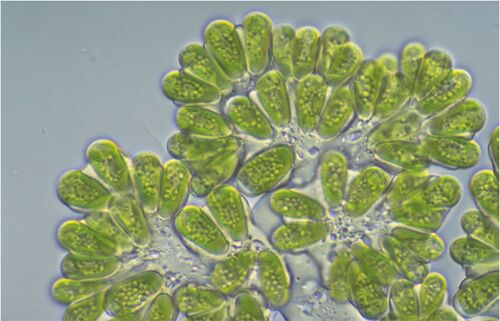 All three races of B. braunii have attracted special attention for several reasons. One, the hydrocarbons can accumulate up to 61% of their dry weight, but this value varies depending on the race and growth conditions and is usually in the 20-40% range. Two, hydrocarbons from all three races of B. braunii can be converted into petroleum-equivalent fuels such as gasoline, kerosene, and diesel suitable for internal combustion engines using standard hydrocracking procedures. This process yields 60 – 70% gasoline which is comparable to the yield from petroleum. Third, over geological time, B. braunii has contributed hydrocarbons to current fossil fuel deposits that are used today.

In addition to identifying the B. braunii genes responsible for hydrocarbon biosynthesis, we ar actively involved in genomic and transcriptomic studies on all three races of B. braunii.

The information gained from our studies could be used in the future to improve B. braunii hydrocarbon biosynthesis for use in biofuel production. Alternatively, the genes identified in our studies could be introduced into other photosynthetic organisms such as other algae or land plants for the industrial production of hydrocarbons and eventual conversion to biofuels.